Are you the bottleneck on the project? 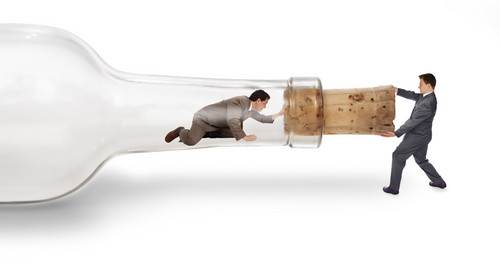 A common challenge that every Lean Six Sigma project faces is unexpected obstacles along the way that can destroy project deadlines, increase cost, and reduce return on investment.

Now the question is: why do Lean Six Sigma projects get delayed?

What is a Project Bottleneck?

In layman’s terms, a bottleneck means that a resource is strained because its capacity is smaller than the demand placed on it. This is where projects lag as work halts.

Bottlenecks can be disguised within staffing, budget(s), client or vendor needs, individuals, process issues, and even weather or a natural disaster. Today, I’d like to talk about a particular project bottleneck that can easily be overlooked.

Often, Lean Six Sigma project leaders will find bottlenecks happen when key leaders or stakeholders, such as a project sponsor, fail to make a decision.

This is very challenging, because your project sponsor wants you to complete the project, but in turn, you’re asking them to help you by making key decisions. A key to managing a Lean Six Sigma project that will come in on time is anticipating what might go wrong and part of that is establishing expectations at the outset.

The Secret to Avoiding Project Bottlenecks With Operational Excellence

This is what I’ve done to overcome project bottlenecks before they happen. At the beginning of every Lean Six Sigma project, it’s important to develop a project charter.

In Operational Excellence, the project charter is incredibly important. It identifies the scope of the project, the business case, your financials and budget, the deadlines, and so forth.

One section of a project charter should outline key project resources. In this section, project leaders can identify every key person involved in the project, including project team members, subject matter experts, and especially the project sponsor.

As you identify each resource, you should identify their role in the project, their duties and what’s expected of them, and how much time they should dedicate to the project.

Let’s take a look at a senior leader position or role on your project, which happens to be your project sponsor. For most Lean Six Sigma projects, you will find that asking project sponsors to dedicate one to two hours a month is sufficient.

Why Do Project Leaders Need This Time from Project Sponsors?

Let’s say you’re meeting with your project sponsor for a half an hour every other week. During that meeting, it’s your time to bring her up to speed on the Lean Six Sigma project. But it is also your time to ask for key decisions that will drive the timeline of your project.

If your project sponsor is failing to give you time to make those decisions, then your project will be delayed. You need them to know what you’re asking of her is crucial to the success of the project. Most importantly, set expectations at the beginning that you will need some of her time on a regular basis and that time will partially be devoted to making key decisions to push the project forward.

Put yourself in the position of the project sponsor. If the project that you’re overseeing as a sponsor is delayed, ask yourself, “Are you giving the project any time?” If not, you may be the bottleneck.